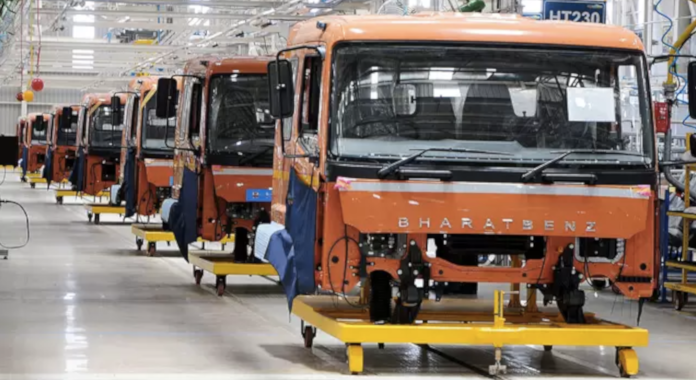 Satyakam Arya, MD and CEO, is also ushering in a new work culture

When Satyakam Arya took charge as MD and CEO of Daimler India Commercial Vehicles (DICV) last November, among his first initiatives was Samvaad.

An interactive session with colleagues across different functions and hierarchies, this concept has been designed to generate dialogue and free flow of ideas. “Every month, we have these discussions with the teams in Chennai and people come up with some really interesting ideas,” says Arya.

From his point of view, there is a lot of change happening all around and it becomes important to constantly generate new ideas. Additionally, there is a chance for people to get to know the CEO better (and vice-versa).

Arya is clearly delighted with what Samvaad has been able to achieve thus far even while reiterating that it is a work-in-progress. By the end of the day, coming up with new concepts or solutions marks the continuation of a journey and not a stop at the final destination.

Agility is another priority at DICV and this is where another initiative, ‘swarm’, comes into play. In the Daimler world, a swarm organisation facilitates agile work. Working in a swarm means removal of barriers across employees where they come together and pool their competencies in a flat structure.

The members of a swarm focus on a task where the solution remains open and throws up creative work with agile methods. This drive at Daimler AG has percolated down to subsidiaries like DICV which realise that it is important to be quick while responding to market requirements.

Beyond his own people, Arya also gives top priority to catching up with his counterparts in the Daimler ecosystem across the country comprising Mercedes-Benz India in Pune, Daimler Financial Services India and the Bengaluru-based Mercedes-Benz Research and Development India.

All the four CEOs first met in Chennai for a brainstorming session followed by one in Bengaluru. The next is scheduled to be held in Pune and there is every reason to believe that these meetings have been very productive. After all, reasons Arya, each of the Daimler entities has its own strengths and it makes sense to share experiences and competencies when needed. The DICV business of making BharatBenz-branded trucks and buses has its strengths as also Mercedes-Benz in passenger cars. This is equally true for R&D and financial services where all the Daimler entities combined have some really serious talent within.

Likewise, Arya is keen to create a startup culture within the organisation where the idea is to look beyond trucks. The thinking behind this move is that the world of mobility is changing by the hour with new disruptions like connectivity, electrification and autonomous driving becoming a reality across the world.

India is seeing enormous creativity emerge in the startup space and companies like DICV fully realise that they can tap some of these sources to get new ideas and stay ahead of the curve. The road ahead could see some really big changes happening and it is here that companies need to be adequately prepared to cope with the new order.

“Beyond trucks is what we call our strategy and the definition of products will change as we provide more services and help the customer. This space will see a lot of action in the coming years,” says Arya.

While the future is full of exciting challenges, things are not so great for the present with a slowdown affecting all vehicle categories in India. “It definitely is a matter of concern and throws up questions on growth in the short-term,” he says.

In medium and heavy commercial vehicles (M/HCVs), the axle load regulations that came in last year have played a role in the current slowdown given that trucks on the road now have 15-20 per cent extra load carrying capacity. Naturally, demand has been impacted to that extent and it will take a while before people buy new vehicles.

Two, continues Arya, the NBFC crisis has been another contributing reason with the liquidity crunch hurting big-time. The economy is also slowing down and that is also working against truck-makers with M/HCV growth slowing down progressively since January this year.

Arya terms the present issue of inadequate access to finance “a huge challenge and a dire situation”. Given that demonetisation switched off a parallel economy from end-2016, it would have helped had the other lifeline been sustained. However, that is not happening thanks to the NBFC crisis and a key umbilical chord for M/HCVs has virtually snapped.

“The good thing is the news on infrastructure development where there is reason to feel upbeat as it will help the entire industry,” says the DICV chief. He is also hopeful that M/HCV sales will pick up in September thanks in part to pre-BS VI buying, coupled with, hopefully, some positive news in the Budget that will be presented early next month.

Arya and his team are also working around the clock on the BS VI deadline which comes into effect from April 1, 2020. “We will have to gradually ramp up BS VI and phase out BS IV to make sure that there is not one truck unsold. This is a huge challenge for the entire industry and let’s not underestimate the magnitude of the task,” he cautions.

The next few months will be tough and companies like DICV need to constantly keep an eye on the entire supply chain and dealer network. Raw material supply will have to be balanced and “we are coordinating closely with the ecosystem which knows how much BS IV/VI need to be produced”.

Going forward, Arya believes that there will be a flat/muted phase for some time post-BS VI which is understandable since the new trucks will be more expensive and there will be some market resistance to buying them as a result. However, things could change from 2021 since the “longterm fundamentals of the economy are strong especially in M/HCVs”.

The other challenge with BS VI is to ensure that clean fuel is available across the country as this will help the auto industry plan its roadmap a lot better. “All cities should at least have one fuel station in place by October before this is spread nationwide by January and going on to March. This can happen in phases,” he says.

This is absolutely essential since auto-makers need to keep their supply base updated constantly on the BS VI timetable. “If I switch over in October for instance, I need to inform my supply base right now in order to plan. God forbid if there is a change subsequently since it will wreak havoc right across the industry,” warns Arya.

Beyond emissions, he also believes that a lot more needs to be done to ensure safety. As he puts it, technology and environment are important but so is safety. “Let us harmonise our approach while focussing on these changes,” adds Arya.

The move to BS VI will also give a fillip to India’s role at a global level. It will throw open more export markets for DICV especially those that are also transitioning to similar emission norms.

Mexico, one of its existing export markets, is a case in point and there will be more in the ASEAN region that could be added to the list.

Whilst on the subject, Arya admits that he is concerned about the fact that there are still a fair number of BS II and III vehicles on the roads. Estimates indicate that 12 BS VI trucks produce the same level of nitrogen oxides as one BS III truck. Similarly, 10 BS VI trucks emit particulate matter equivalent to just one BS III truck, which pretty much gives an idea of the difference between the two when it comes to emissions. “If you remove those older trucks from the road, it will be much better and there is, therefore, a reason for a scrappage policy to be in place,” he says.

Arya also makes no bones about the fact that DICV has delivered on reliability and fuel efficiency. “Those people who understand the value of our trucks continue to buy them,” he says, which is also good reason not to go in for discounting. “We will only produce what we sell. We will not overstock and sell things at a discount,” reiterates Arya.

There is a lot of work happening at DICV beyond BS VI with the ultimate objective being delivering more value to the customer. There could be some interesting product initiatives given the rapid changes in the e-commerce space though Arya does not comment on any specifics.

“The BharatBenz brand is about creating value for the customer. We are studying different segments constantly,” he says. Electric is also an area that is on the company’s radar and it is likely that buses will be the first candidate. And in the event it also decides to focus on intracity options, there could well be an electric pick-up in the foreseeable future.

“There needs to be an ecosystem in place to support electric. India has the potential and we could do a lot more here. The key is to invest in technology and make it affordable by ensuring volumes. It is important to have enablers while pushing for change,” declares Arya.