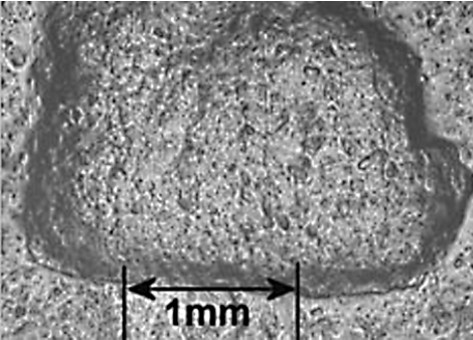 Debris particle contamination in lubricants has been identi?ed as a major cause of premature bearing and gear fail­ure, with accompanying costs in equipment downtime, warranty, and lost productivity. Various experimental and predic­tive methods have been developed to assist the design engineer in analysis and development of equipment that is less sensitive to such contamination. This paper provides an overview and new data comparing bearing life test results and predictive analysis methods for various tapered roller bearings operating under debris-contaminated conditions. Recent work has re?ned one analytical method (using a surface characterization technique), correlated this method with bearing test lives in debris conditions, and pointed to design and manufacturing modi?cations in the bearings themselves, making the bearings live longer in debris-contaminated environments.

Equip­ment design engineers have many contaminat­ed lubricant analysis tools to help them assess the det­rimental effects of debris particles on machinery wear and by their use can monitor the resulting loss in perfor­mance [1, 2, 3, 4]. Others are aimed at understand­ing the material make-up and characteristics of the lubri­cant contamination [5]. Most of the analysis tools just mentioned are used in monitoring and understanding the evolution of equip­ment failure, as well as the level of lubricant contamina­tion for predicative and preventative maintenance. But    they do little in helping to evaluate the impact debris damage has on ?n­ished gear and bearing surfaces as it relates to fatigue life of their materials.

Nix­on and Cogdell developed a method for assessing the detrimental ef­fect of debris contaminated lubrication environments [6] which is appropriately labeled Debris Sig­nature AnalysisSM. The following ?eld study, conducted in cooperation with an equipment manufacturer, is an example of the advan­tage that such a surface characterization method might provide in evaluating equipment systems. The standard method for determining particle size distri­butions and concentration levels was used to monitor con­tamination levels in an actual customer ?eld application. Bearings from these ?eld units were then removed from service after an extended period of time and examined for debris damage both visually and by the surface characterization method in or­der to quantify the damage levels. Table 1 shows a few typ­ical particle size distributions and concentrations observed through the period of service by the equipment. Figure 1 shows a typical visual appearance of some of the bearing load carrying surface after the same period of service. 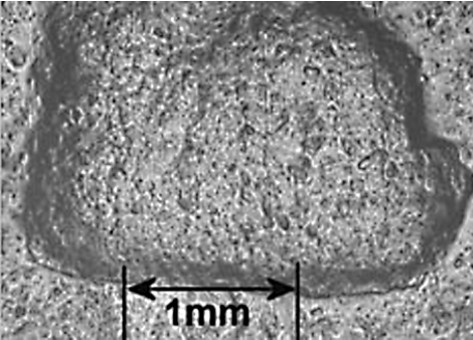 It was quite evident in just these visual comparisons alone that the lubricant analysis did not illustrate the level of surface damage that might be expected. By a comparison of the data in Table 1 to the damage evident by the visual appearance, it is certain that the lu­bricant sampling did not predict any particles much great­er than 300 um in size. However, the visual comparison of dents, some on the order of 6 mm in diameter, indi­cates the presence of huge particles on the order of 100 times larger than the 300 um size particle from the lubri­cant sample. The Debris Signature AnalysisSM method was used to more accurately characterize the surface damage and indicated a 42% life reduction would be pre­dicted. This example serves to illustrate the need for surface characterization in linking performance to contamination damage.

As part of the evaluation process for assessing and predicting bearing performance under conditions of de­bris contamination, numerous bearing life tests have been run and a standardized method to apply debris damage was used [7]. Tested bearings were pre-dented and no additional debris was added during these tests.

In Figure 2, the performance comparison for ?ve ma­jor tapered roller bearing manufacturers is shown. This testing was previously reported [8]  and was performed on what is considered to be standard product, manufac­tured with the conventional process common to each giv­en manufacturer. The results within this group varied by a factor of about three with Brg A having the highest rela­tive performance. Brg B and Brg E used through hardened material and processing, the other bearings C & D were manufac­tured in part or completely of case carburized compo­nents. 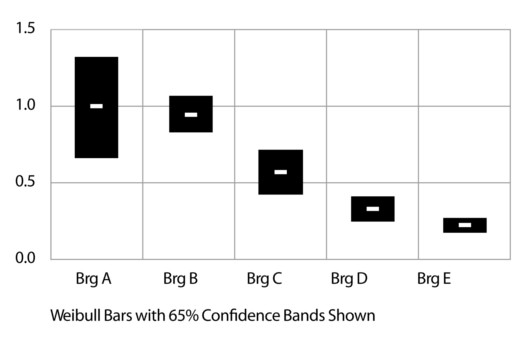 For statistical comparison purposes, the life test re­sults are shown bracketed with 65% con?dence bands. The width of these bands is calculated based on the sam­ple size and scatter of testing failures and is a function of the Weibull slope. When such bands overlap between test groups, no statistically signi?cant difference in perfor­mance can be claimed at the 90% con?dence level.

Figure 3 shows the normalized results for debris dam­age testing with conditions identical to Figure 2. In this Brg A had life test results that slightly exceeded the results of the special bearing. 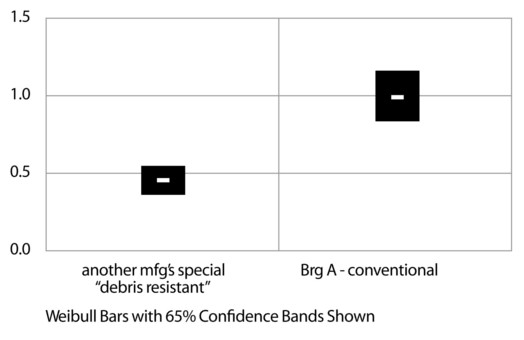 Figure 4 shows the normalized life test results with conditions similar to that of Fig­ure 2, except the debris media was changed. This result­ed in only light debris damage being incurred. Here Debris Signature Analysis was applied to conventional Brg A, and predicted only threshold life reduction due to debris. Un­der these conditions, Brg A had performance results that were equal to the results of the special bearing. 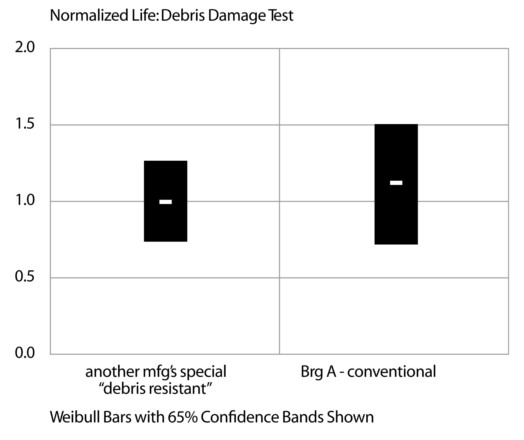 Figure 5 shows the normalized results with a large, 318 mm outer diameter bearing. A different set of life testing conditions was applied (caused in part by the use of the larger test bearing) as well as new debris media and new method to apply the debris me­dia. This resulted in moderate-to-se­vere debris damage. Debris Signature Analysis was ap­plied to conventional Brg A and predicted up to a 3 times life reduction. Under these conditions, Brg A had life test results that signi?cantly exceeded the results of the special bearings. 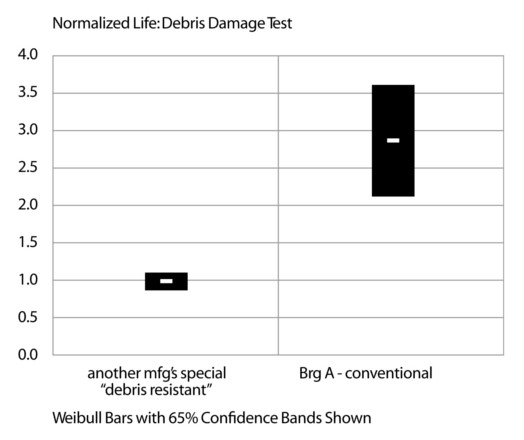 One conclusion from this testing is that differences in the manufacturing process, materials and metallurgical practices used in bearings produced by different manu­facturers impacts fatigue life of bearings operating in high debris environments.

By studying the unique metallurgical design and pro­cessing parameters used to produce Brg A, an improved debris resistant approach was developed. The goal was to enhance the bearing mechanical properties of strength, ductility and toughness, particu­larly at the functional contact (raceway) surfaces. The ap­proach included change to key design speci?cations and the tightening of process control limits for select param­eters particularly during heat treat. The proprietary speci?cation involves select parameters including material chemistry, retained austenite, microstructure, and post heat treat control of near surface properties.

The performance results of this new debris resistant design and processing approach are shown in Figure 6. In this particular testing scheme the lives of two de­bris dented conventional baseline groups were approx­imately 2 to 3 times less than the predicted life with no denting. Debris Signature Analysis was applied and pre­dicted a debris life reduction factor between 0.4 to 0.5. for these baseline bearings. 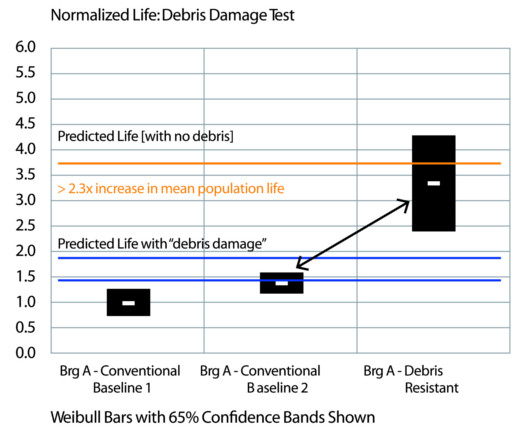 The theoretical basis for the debris life prediction tool was presented by Ai [12] wherein the effects of de­bris dents on raceway contact stresses and fatigue life are determined. The model was veri?ed with controlled debris dent bearing tests using bearings with the performance characteristics represented by Brg A.

Since debris in applications covers a large range of particle sizes, a program was put together to determine the effect of lubricant contamination composed of realis­tic particle size distributions. Two approaches were used. The ?rst approach simulated debris particle size distribu­tions that correlate to ISO 4406 code distributions. 52100 steel debris particle distributions for ISO 13/10, 15/12, 17/14, 18/16, and 21/18 were mixed with lu­bricant and used to dent bearings as explained by Nixon [7]. As an example, Figure 7 shows the particle distribu­tions used for the ISO 4406 21/18 and 15/12 cleanness levels. These distributions were developed from the analy­ses and ISO 4406 characterization of debris contaminated used oil. The dented bearing surfaces were then optically mapped to obtain dent size and surface density distribu­tions. Thus obtaining a Debris Signature AnalysisSM pro­?le for each of these debris conditions. Data ?les contain­ing dent sizes and surface densities were stored for use by application engineers in analyzing the life of bearings which might be operating in these environments. 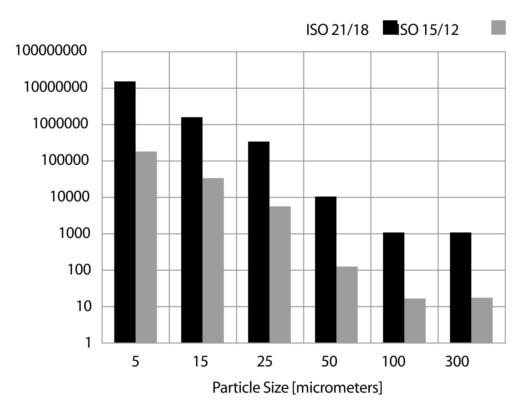 The second approach was to obtain bearings from actual applications in the ?eld and optically characterize the sizes and surface density of dents on these bearings for future life analyses. These were larger bearings that generally operate in more heavily contaminated condi­tions and cannot be adequately described by ISO 4406. Photographs of these dented surfaces can then be used by engineers to select a level of raceway surface damage typically seen in their applications.

The analysis of typical life test lubricant taken from standard life test machines have shown that the base cleanness level is ISO 15/12. The debris life factor has a value of 1.0 at this cleanness level. Cleaner lubricant would provide enhanced life and lubricant with more de­bris would give a reduced life.

To determine a life reduction factor, the dent Debris Signature AnalysisSM data ?les are then used in the follow­ing manner. The rolling element contact loads are deter­mined for application conditions so as to determine con­tact stresses and contact area. The effect of  the size and number of dents on the life of the bearing  in this envi­ronment can then be determined. Figure 8 shows a plot of  debris life factors (a3D) for a 33 mm bore tapered roll­er bearing for different lubricant cleanness levels and ra­dial loads in terms of percent C(90) rating. It can be seen that at heavy loads the effect of varying debris levels is re­duced because the net effect on the general stress level is reduced as opposed to the greater effect on modifying the general stress level at light loads. 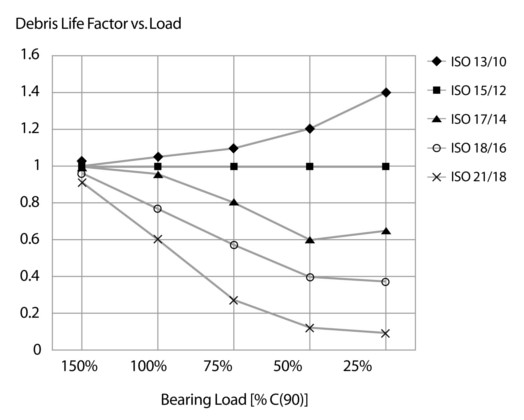 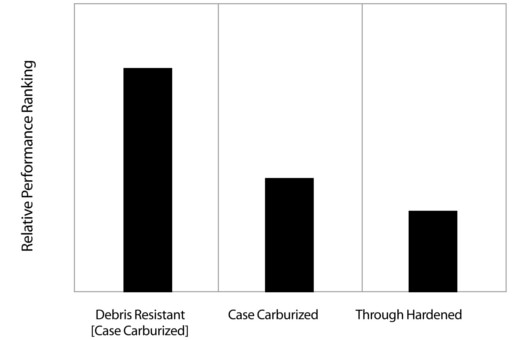 A signi?cant number of debris dented bearings have been life tested in the authors’ life test machines. The cor­relation between the experimentally determined reduction in life due to debris dents and the life reduction predicted by this approach is shown in Figure 10. [15] For the au­thors’ bearing product, this model has been shown to pro­vide a practical connection between actual debris dents and subsequent fatigue damage. 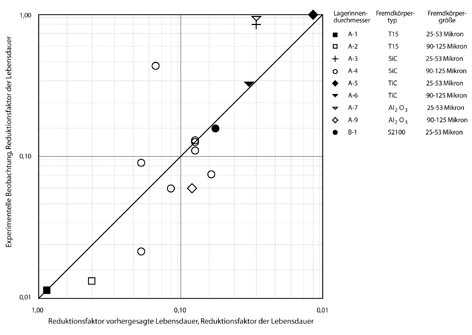 The following conclusions and observations are pro­vided as a result of the analysis experience and experi­mental test results.

1) For heavily contaminated systems, lubricant analy­sis methods alone might not be a reliable method for link­ing bearing damage and the resulting ?eld service.

2) Fatigue life testing of bearings to evaluate debris damage sensitivity, can be a useful tool to differentiate performance of products.

3) Standardized life testing with debris showed that conventional and debris resistant bearings from various manufacturers perform at signi?cantly different levels. These differences should be considered when making comparisons concerning the relative hierarchy of product debris resistance and when applying performance pre­diction tools.

5) Debris Signature AnalysisSM should provide a tool for comparing, in a quanti?able way, the contamination environments of successful equipment performance to those that are not successful.

All images: The Timken Company