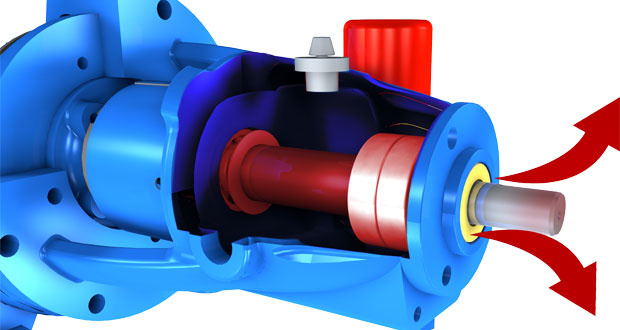 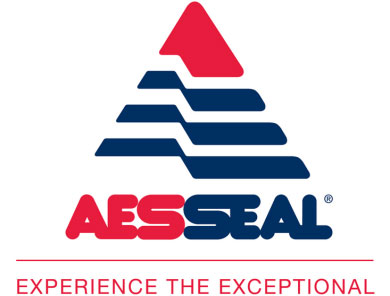 The reliability of most rotating equipment is almost inevitably linked directly to bearing life, and it is estimated bearing failure is responsible for almost 21% of these equipment failures (Bloch, 2011). Research into bearing failures (1) shows that just over half of these are a result of contamination of the bearing oil (Fig 1). Clearly it is therefore essential to ensure that contamination of the bearing lubricant is minimised and if possible eliminated if optimum bearing life is to be achieved thereby improving the equipment reliability (MTBF).

Prevention of bearing lubricant contamination can be provided by use of commercially available bearing isolators (or “bearing protectors”) however before applying such devices it is advisable that the user ensures that the protection device used does not itself adversely impact on the equipment reliability.

Here, Dr Chris Carmody [Special Products Manager] at AESSEAL explains how through the use of labyrinth design bearing protection seals, that bearing oil contamination can be eliminated. This is further demonstrated through the use of statistical modelling and analysis of field data such that a properly designed device will last at least as long as the theoretical life of the bearing it is protecting. 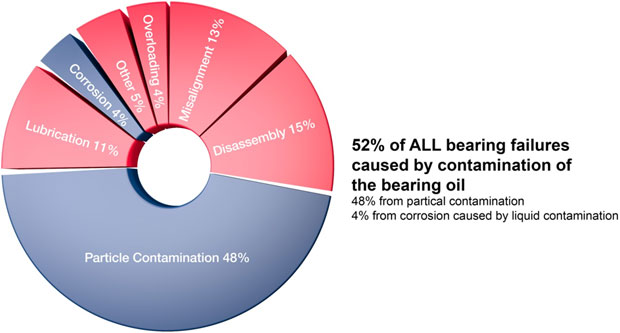 One of the significant contributors to bearing oil contamination is the bearing enclosure breathing process required by rotating equipment. When equipment rotates the bearing housing heats up and the oil/air mixture inside expands and this is forced through the seal (Figure 2). The real problem arises when the equipment cools because the oil/air mixture cools and contracts sucking air from the external atmosphere through the bearing seal back into the housing (Figure 3). If bearing seals are to work effectively they must facilitate this ‘breathing cycle’ in order to extend bearing life. 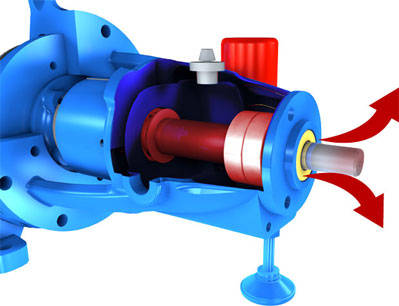 Figure 2: When the equipment rotates the bearing housing heats up and the oil / aid mixture inside heats up forcing air through the seal. 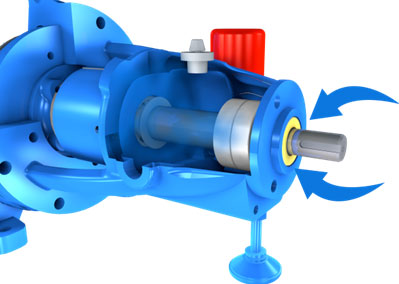 Figure 3: As the equipment cools the oil / air mixture contracts sucking air from the atmosphere through the bearing seal into the housing.

Figure 4 below shows the effect of water contamination on a continuous digester that was originally fitted with inadequate bearing protection. The moisture contained in the atmosphere was able to penetrate into the bearing housing. This was enough to destroy the bearings. Independent research (2, 3) has shown that water contamination as low as 0.002% (20ppm) in some oils can reduce bearing life by as much as 48%. The challenge for maintenance and engineering professionals is to reduce this contamination and provide an effective method of sealing the space between the bearing housing and the drive shaft. 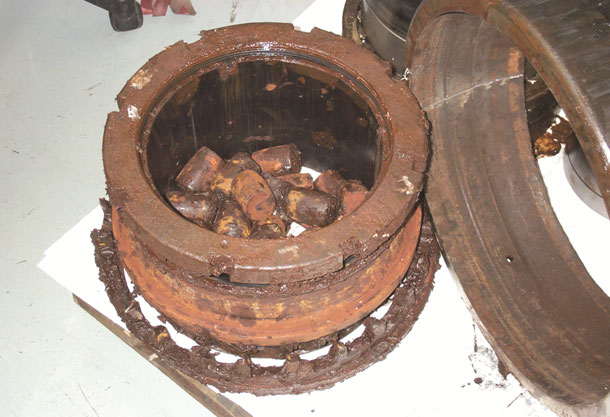 Figure 4: Water contamination on a continuous digester prior to a LabTecta® 66 being installed. 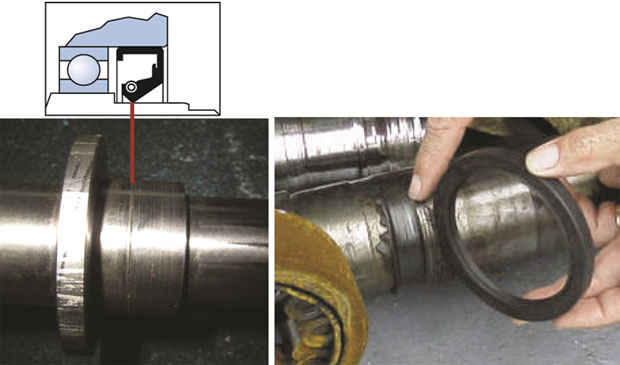 Historically the most common way of protecting bearings was to use a lip seal. Today however it is generally accepted that lip seals have limitations1 (due to inexpensive initial cost they continue to be widely applied). They also rely on surface contact between the seal lip and the shaft to form the seal. This surface contact often results in costly damage to the shaft itself (Fig 5). In addition, lip seals can’t fully protect the bearing from moisture or particle ingress, which ultimately results in bearing failure. Other factors to consider are that they have short service life (5) compared to labyrinth seal designs, they cannot be used in API applications and they don’t prevent the loss of bearing oil and hence gradual loss of lubrication resulting in premature equipment failure.

An alternative to lips seals are bearing protector seals. The design of bearing protectors varies significantly. Typically some of these bridge the gap between rotating and stationary components with an ‘O’ ring or wedge ring (Fig 6). These components often wear or don’t adequately effectively seal the bearing housing. As a consequence of this many of these designs are now viewed as out dated and ineffective. 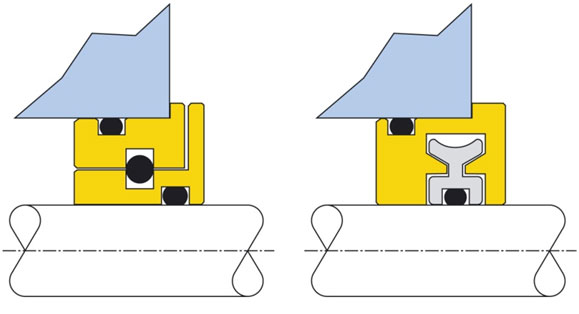 In recognition of these shortcomings, more advanced labyrinth bearing protection seals have been developed, which can offer dust tight protection against both solids and liquids and are also non-contacting in operation.

LabTecta®66 is one such labyrinth bearing protection seal that incorporates patented dynamic lift technology to protect against the ‘breathing’ issues that contribute to 52% of all bearing failures5. This dynamic lift technology uses the centrifugal force of rotating equipment to open a temporary micro gap allowing expansion of the oil air mixture in the bearing housing, which consequently allows the equipment to breathe (Figure 7). 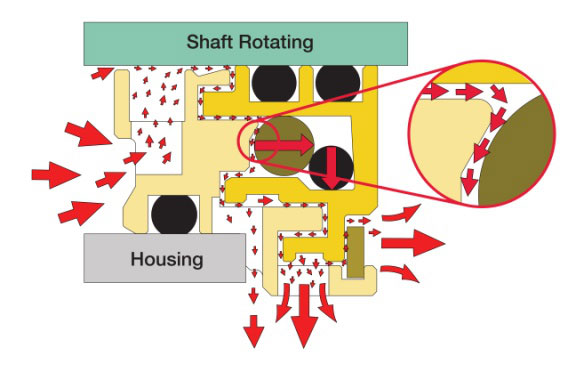 Fig 7 Centrifugal force causes a temporary micro gap to be created allowing expansion of the oil air mixture in the bearing housing, allowing the equipment to breathe

When the equipment stops rotating the micro gap immediately closes forming a perfect seal (Figure 8). This prevents dust and moisture being sucked back into the bearing housing and eliminates bearing oil contamination. 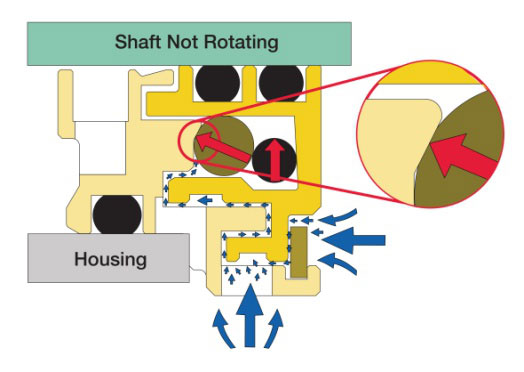 Fig 8 When the equipment stops the micro gap immediately closes

Rated to IP66 of the ingress protection code, LabTecta®66 is capable of reducing water contamination of the bearing oil from as high as 83% to just 0.0003% compared to lip seals (6), even when exposed to high pressure water jets. The range is ATEX certified for use in explosive environments and a number of special designs make it suitable for a wide and varied range of applications.

LabTecta®66 is also designed with a thinner cross section and seal length than competing devices, which means that it can be retrofitted on more equipment without having to carry out modifications. Furthermore the design of the LabTecta®66 enables it to be positioned differently on the shaft meaning shafts already damaged can be fitted with LabTecta®66 without replacing the shaft.

LabTecta®66 is a labyrinth bearing seal design that is non-contacting during operation. Once the seal starts to rotate centrifugal forces acting on the dynamic o ring forces it outwards creating a micro gap and hence no wear can take place during rotation. Therefore, a carefully specified, properly installed and operated non-contacting labyrinth bearing protector can have an infinite life expectancy.

Table 1 details the recorded LabTecta® 66 returns between January 2006 and September 2013 (note that the first occurrence was in June 2006).

A recent research paper (7) produced by AESSEAL® analysed the 120,000-plus LabTecta®66 products that had been supplied in the 8 years since the product was launched. During the period from January 2006 to September 2013 only fifty two of the 120,000 plus LabTecta®66 bearing protector seals were removed from service. After detailed examination, it was concluded that any abnormality was found to be operator based (such as mis-installation and lubricant overfilling) and that the failures were not actually attributable to the design of the product.

The research also conducted an accelerated life test with a stop start cycle of 4 times a day, which determined that the average LabTecta®66 life expectancy was over 10.5 years. The paper also showed that by using an established statistical (WeiBayes) technique, the average life expectancy was also in excess of 10.5 years. However, because such statistical data can only be modelled with failure data, and as no LabTecta®66 has ever failed, the results have to be viewed as conservative.

With an average life expectancy of over 10.5 years a LabTecta®66 bearing protector seal has been proven to be the most effective way of protecting and extending the life of the bearing fluid and hence the bearing itself. The cost of this kind of protection is minute compared to equipment failures, machine downtime, lost production and more onerous maintenance requirements that are caused by premature bearing failure.

The real life examples of LabTecta®66 in service today show that such upgrades can have payback periods of as little as 1 month. Even in the arduous moisture laden environments frequently found in pulp paper manufacture, LabTecta®66 has the longevity that both experimental and statistical data suggests. The following are examples of some of the many LabTecta®66success stories we have to date.

A leading paint manufacturer was experiencing unacceptable reliability levels on a badly aligned bottom entry paint mixer. Leaking paint was entering the motor bearing through the OEM lip seal, causing the motor to fail on average every 2 months, costing over £6,000 a year.

The cost of replacing the lip seal with the LabTecta®66 was repaid within 1 month of fitting and has currently increased the MTBF of this application by over 500%. The LabTecta®66 upgrade is saving the customer over £6,000 per annum in reduced maintenance costs and an expected 9.5 days per year of lost production.

A paper mill in Maine, USA was having issues with water and stock getting into their Hydropulper gearbox. This was shortening the life of the gearbox and was costing the mill up to $50,000 per outage.

The Hydropulper gearbox has a vertical shaft that is sealed with packing and leaks excessive amounts of stock and water down into the gearbox which was sealed with a lip seal. AESSEAL® installed a LabTecta®66TE (top entry) bearing protector seal in August 2006, and over 8 years later is still giving the paper mill uninterrupted service.

A coal fired power plant in the USA, was having 3 – 4 bearing failures a year on their primary air fan. For safety reasons the customer would inert the fan duct with steam to reduce the risk of a flash fire from the coal dust in the system. This safety procedure was causing water to get into the pillow block bearings, leading to premature bearing failure, and a $10,000 to $12,000 bearing replacement cost.

AESSEAL® installed a LabTecta®66RDS (Radially Divided Seal) on the drive end to ensure no heavy equipment needed moving or shaft realignment was necessary, and a standard LabTecta®66 on the non drive end. The LabTecta®66 bearing protectors have been installed and running trouble free for over 2 years, saving the customer over $80,000 in bearing replacement costs.

Chris went on to academia for a bachelors degree, a master of science in structural integrity and doctoral degree on the fluid structure interaction of bioprosthetic heart valves. He re-joined industry as a Consulting engineer and worked on many prestigious projects such as the A380 Airbus, the award winning Falkirk wheel and the new Wembley stadium. Chris returned to AESSEAL and took up the position of special products manager where he is responsible for development of high integrity sealing projects including dry gas seals.

He now has 25 years of experience in the design of mechanical seals and is a named inventor on many of AESSEAL product designs. In addition to his responsibilities at AESSEAL he also sits on several different bodies including the API692 Compressor Dry Gas Seal Committee