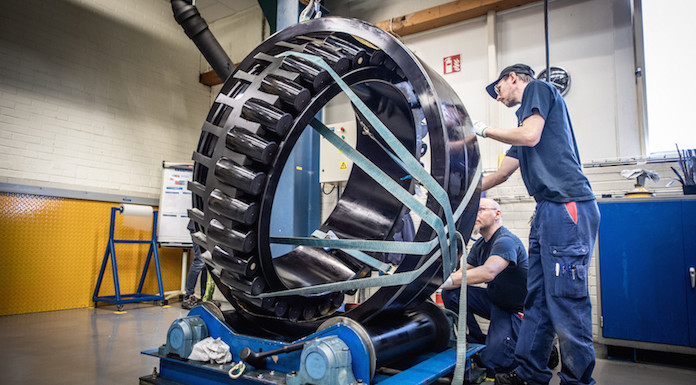 SKF is developing a fully commercial version of its Sensor Roller – which will gather detailed information from large bearings such as those used in wind turbines. 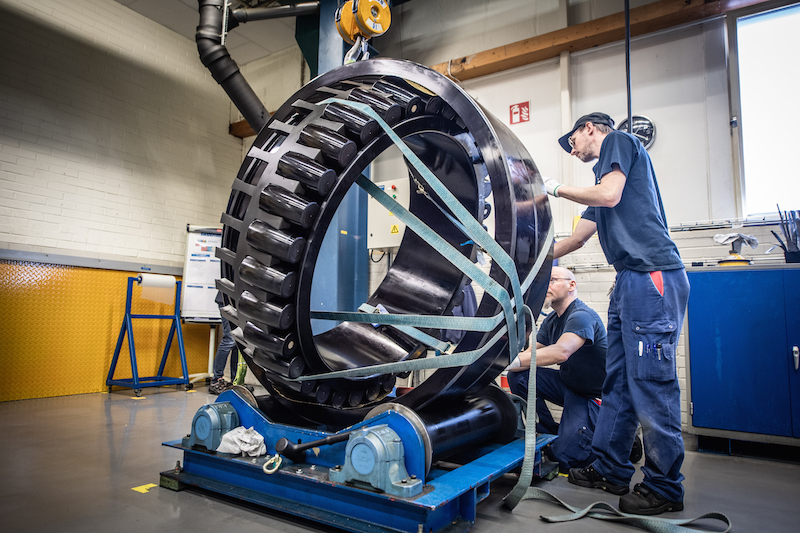 Information is everything in modern engineering. The ability to collect and analyse ‘big data’ is practised across the sector, from factory floor production to operating remote windfarms.

This is increasingly done by smart components that gather, analyse and transmit process data. For bearings, critical details such as load, rotation speed and temperature can be used to calculate bearing life. This, in turn, helps to improve the performance – and lengthen the life – of key assets.

One system that can perform this is SKF’s Sensor Roller system. It uses rollers embedded with sensors to gather several types of data. This data can be transmitted wirelessly to maintenance staff, allowing them to gain an instant picture on the state of a piece of machinery. It is typically used in large bearings, as the roller must be of a minimum size (in order to accommodate the electronic components).

Also, it was only capable of measuring loads and could not gather other data such as temperature and rotation speed directly. Overall, the system was relatively limited in its use, and was generally aimed at troubleshooting. 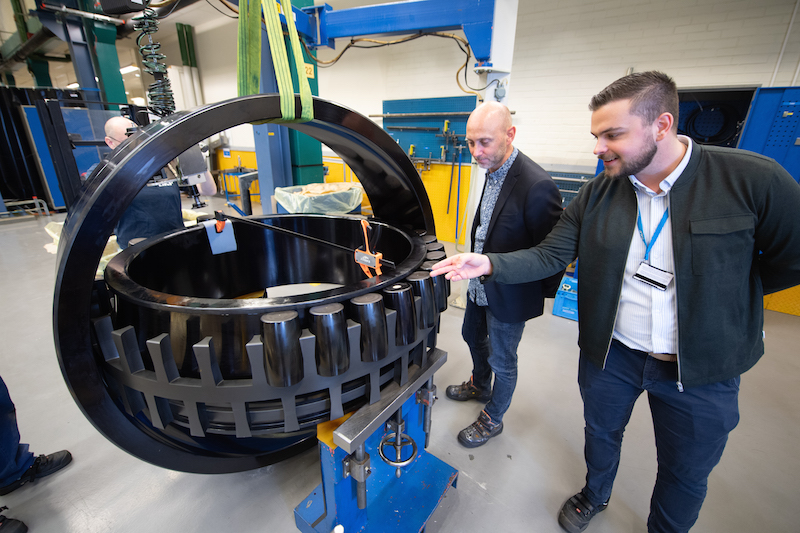 The modern Sensor Roller system is far more sophisticated and is becoming more so as product development continues. To date, SKF has spent around three years improving and modifying the product into an advanced prototype. Different versions and sizes continue to undergo rigorous testing. Now, it is installed in a large wind turbine bearing for a one-year field trial. The aim is to make Sensor Roller a fully commercial product – that can last as long as the bearing itself – within two years. Such a system will enable continuous process control, with the opportunity for SKF to offer long-term Rotating Equipment Performance (REP) contracts.

Sensor Roller consists of a hollow roller containing various measurement sensors, associated electronics and a battery. The sensors measure three types of data: load, temperature and rotation speed. All three are critical in determining bearing life, which has a direct effect on asset life. While temperature and rotational speed both influence bearing life, the effect of load is far more significant.

The roller has three accelerometers that measure acceleration in three directions plus a tri-channel gyroscope that measures rotational speed in three axes. Together, this shows the complete motion of the roller. Accurate measurement of rotational speed can reveal if the roller is moving or sliding – rather than truly rolling – which can cause overheating and subsequent deterioration. 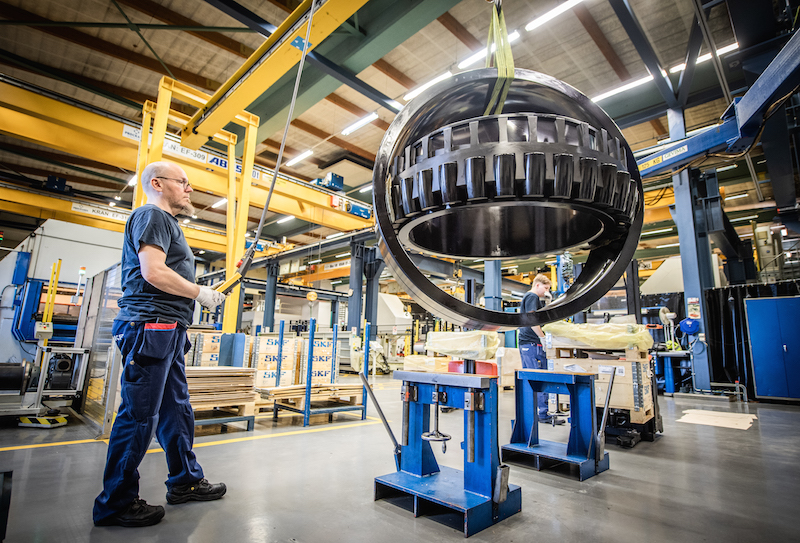 Measuring temperature is relatively simple but is critical in one particular area: lubrication. If bearings run too hot, lubricant thins out; this reduces levels of protection, potentially causing metal-metal contact between raceways and rollers.

The roller itself is long enough to accommodate three separate load measurement points. This allows it to detect a variety of different effects. For instance, a mismatch between loads along the roller can highlight misalignment of the raceway. This can result in serious problems if not corrected. A polar plot of the load can show whether the bearing is loaded correctly and can even pinpoint imperfections in the design of the bearing and/or the surrounding structure.

The way that load is transferred in these types of large bearings depends heavily on the system into which they are installed. For instance, large SKF bearings for wind turbine main shafts are 4m in diameter.

Compared with a typical small bearing, the rings for these large bearings are relatively thin. This means that ring stiffness is much lower, so that the structure has a huge influence on bearing performance.

Measuring all relevant parameters therefore helps both SKF and each customer to understand the application in greater detail, by demonstrating exactly how a bearing is performing in each application and under varying operating conditions. This knowledge can then be used to improve reliability and efficiency, while reducing whole-life cost.

SKF has been testing the Sensor Roller rigorously in a variety of bearing types and sizes for some years. For example, it has been put through its paces on specialised test rigs at the company’s Sven Wingquist Centre in Germany since 2017, where the product is being assessed in spherical, cylindrical and tapered roller bearings.

The data generated has helped product development teams to understand how these bearings behave in reality, with the data being used for designing new bearings, rather than data from within simulation programs. 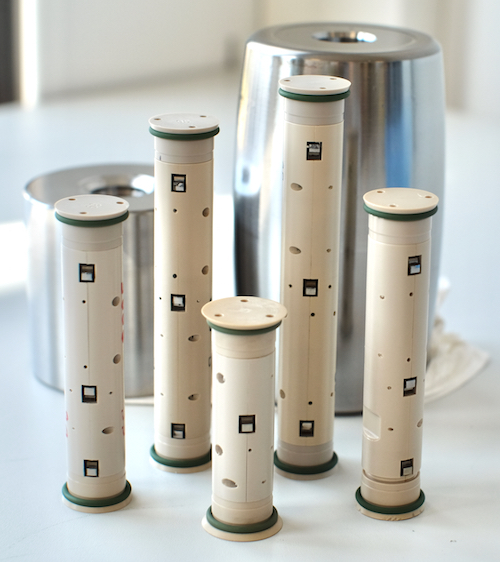 SKF has also installed a Sensor Roller System in a wind turbine main shaft bearing in Northern Germany, for an extended field trial. The radio gateway – which transmits the data – has been installed in June and the application will run for twelve months. It will capture the behaviour of the main shaft bearing, in minute detail, for the whole time. This will help SKF, and the customer, to understand exactly how seasonal variations in weather affect performance.

SKF has also helped the customer to verify pre-load conditions, which is vital in making sure that bearings keep rolling (and do not slip). Part of the verification process includes checking that the customer has assembled the bearing correctly before it goes into service. As the Sensor Roller moves through the bearing, it provides insight into the load variation caused by manufacturing tolerances and support structure.

At the end of the trial, both SKF and the customer will have learnt a lot more about how the bearings operate under real conditions. Normally, bearing designers are restricted to using statistical data on wind conditions, with a variety of scenarios that are based on assumed operating parameters. Because of this, bearings and other components are often over-engineered (or over- dimensioned) in order to accommodate all potential forces acting on them. Using real data will give the designers better inputs for their simulation models, which will optimise future designs.

At a basic level, understanding the exact forces acting on a bearing means that parts could be made thinner. This, in turn, will save on material, weight, energy and ultimately, cost.

While the Sensor Roller has come a long way from the Magic Roller, SKF has plans to take it much further. Within two years, it intends to have a fully autonomous roller that can last the life of the bearing. This means replacing the battery, which has a limited lifespan, with an energy harvesting system; SKF already has access to this technology and is working to integrate it into the next generation of prototypes.

The Sensor Roller of the future will also do more than simply gather data. For instance, it should be able to determine the remaining lifespan of a bearing, by feeding precise data into a bearing life model. This early warning will help operators to schedule maintenance or order a replacement bearing. Ultimately, this helps to avoid unplanned shutdowns, which lowers cost of ownership. 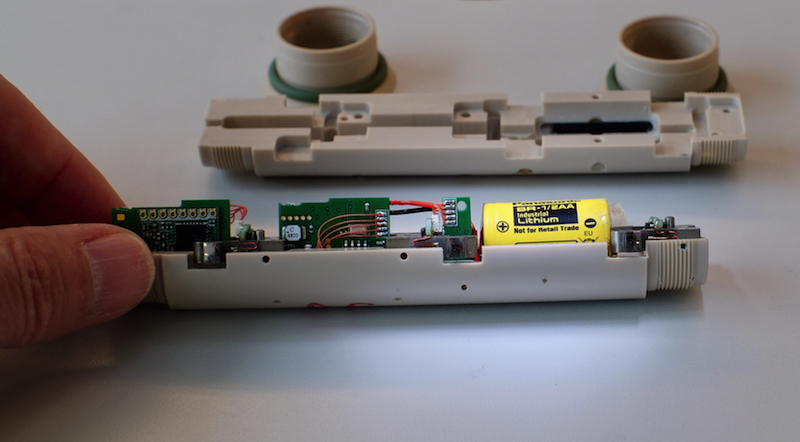 Sensor Roller could also help to control the operation of the wind turbine itself. Here, an operator may want to harvest as much energy as possible during high winds, without the risk of overloading the bearing. Fast, accurate feedback on bearing forces will help to determine the precise conditions, such as pitch angle, that maximise energy conversion within safe limits.

With electronic components continuing to shrink in size, SKF believes these rollers will one day become available for smaller bearing sizes. However, for now, the immediate aim is to get Sensor Roller ready for large bearings.

This interview is published in Bearing News magazine June 2021 issue