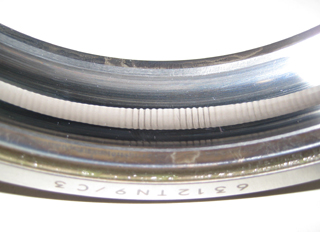 Whether in the plastics, textile or motion control industries, damage caused by electric discharge is a well-known issue, and today it is more prevalent than ever. It primarily affects rolling bearings in machines susceptible to static charging. In many cases, conductive grease made especially for these applications can provide an inexpensive and efficient solution to this problem, while at the same time ensuring optimum rolling bearing lubrication.

Static charges may have a variety of causes. In film stretchers, for example, plastic material is conveyed on steel rollers, leading to electrostatic charging. In tumble drier drums, the plastic content of the laundry, such as nylon, may be the cause. Rolling bearings operating under high loads have a particularly high risk of damage, since there is frequently partial direct contact between the rolling elements and the raceways, leading to sudden discharge, not unlike an electric arc. As the metal-to-metal contact is restricted to a very small area, even currents well below 1 ampere can cause the contact points to weld or fuse together. Typical discharge damage is in the form of plates, craters or grooves on the bearing.

The cause of the damage is a voltage applied to the bearing, which can be of three different types:

Craters are the result when surface melting takes place on raceways due to electric potential. Molten metal particles may also be carried off and deposited on the raceway, where they are rolled down. Grooves form when current flows while the rolling elements and the raceways are under load. This causes the rolling elements to vibrate and, over time, typical grooves form on the inner and/or outer ring. Repairing such damage takes a lot of time and money – in extreme cases, the bearing as a whole has to be replaced. The severity of the damage depends on a number of factors, such as current intensity, time of exposure, bearing load, speed and lubricant used.

Conductive greases can solve the problem in an efficient and inexpensive way before damage is caused. A conductive rolling bearing grease conducts the electric charge continuously through the bearing, thus preventing point-to-point flashover in the first place. At the same time, a rolling bearing grease offers a long lubricant life and high reliability.

Figure 1: Insulating model grease with a base oil viscosity of 70 mm2/sec at 40 degrees C. With a resistance of 2 million Ohm over the whole speed and voltage range applied, this combination of grease and bearing shows an insulating behavior.

In order to determine how conductive rolling bearing greases, such as Klüberlectric BE 44 152 from Klüber Lubrication, make a difference compared with conventional greases,  use of the DIN 53482 standard describes how the electrical resistance of non-metallic materials is measured. It can be determined by measuring the resistance between two plates between which the grease is contained in an insulated hollow cylinder. The distance between the electrodes can be anything from one millimeter up to several centimeters. In addition to this standardized test setup, Klüber Lubrication developed its own dynamic test rig, which was used to develop and optimize the special grease. 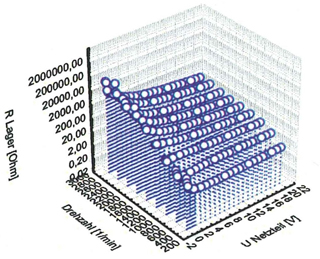 Figure 2: Conductive model grease with a base oil viscosity of 70 mm2/sec at 40 degrees C. The electrical resistance is considerably lower and depends on the bearing speed and applied voltage, making a difference of up to four powers of 10.

Of course, in all applications of conductive greases in rolling bearings, the maximum expected current intensity must be taken into account. If it exceeds 1 ampere, insulating the bearings with ceramic, plastic or other materials might be recommended. Another possible solution is the use of bearings with ceramic rolling elements. However, such measures entail high costs and may make substantial design changes necessary. At low current intensity, in particular, the use of a conductive rolling bearing grease can be an inexpensive alternative to efficiently prevent discharge damage.Besides its “electrical” performance, a rolling bearing grease is also expected to offer good service life and high reliability. That said, when selecting a lubricant, its suitability for a particular rolling bearing application should also be checked. In this regard, reliable information can be obtained, for example, through test runs according to DIN 51821, part 2, testing the upper temperature range and lubricant life. Additionally, performance characteristics like corrosion protection and speed factor should also be taken into account.

The higher conductivity of greases can be ascertained under dynamic conditions, such as in a rotating bearing. This is done on a purpose-built test rig, where a DC voltage of up to 20 V is fed into running, insulated ball bearings. By determining the voltage drop across the bearings and determining the current intensity, electrical resistance can be calculated. The bearings can be run at varying speeds, which allows conclusions on how the resistance depends on a bearing’s speed. (see Fig. 1 & 2)