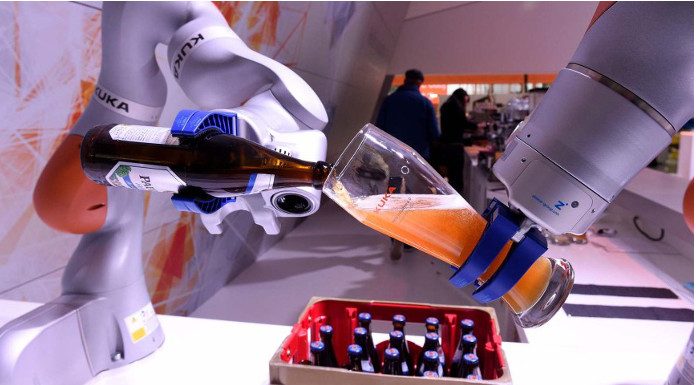 Over 225,000 visitors attended the world’s leading trade show for industrial technology and took major steps towards Industrie 4.0 and energy systems for the future.
The lead theme “Integrated Industry – Creating Value” showed the way forward: The age of integrated industrial and energy systems has begun. Now it’s time to press ahead with market-ready 4.0 technologies to create more value.

What were the highlights, and what did visitors gain from HANNOVER MESSE 2017? This artcile will review the show in general and illustrate how you can stay updated with information until the next HANNOVER MESSE.

Over 6,500 exhibitors from 70 countries and 225,000 professional visitors in 5 days. Do you want more facts and figures? This infographic illustrates the success of HANNOVER MESSE 2017.

What was rolling at the MDA – Bearing Halls

BearingNEWS will dedicate the coming June issue to the latest developments and analyzis about what’s presented during this key event and the further evolution in the field of bearings and power transmission products. You can contact [email protected] for all your questions and input for the coming issue. 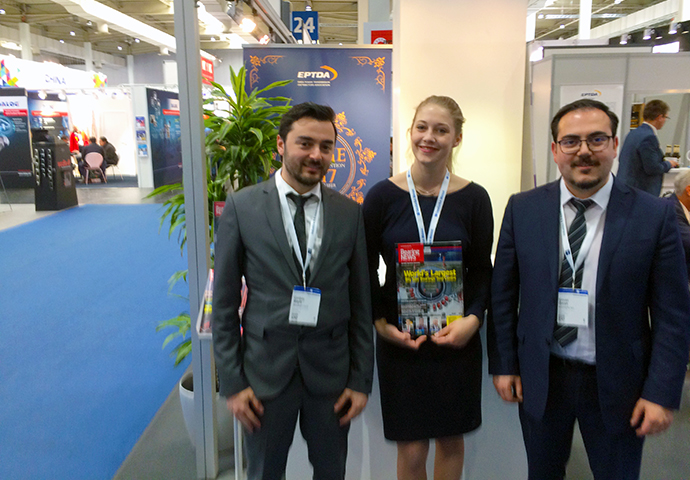 Making the benefits of digitalization tangible – that was the declared objective of HANNOVER MESSE 2017. After five action-packed days at the world’s leading trade fair for industrial technology, the organizers spoke of a thriving event. A large number of solution-seekers gathered in Hannover to immerse themselves in the potential of intelligent robots, adaptive machines and integrated energy systems, taking attendance to new heights. 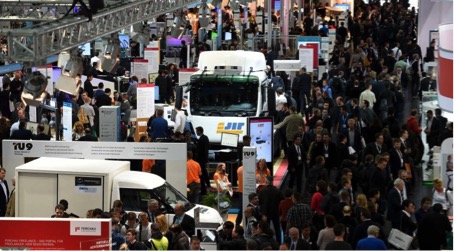 “More attendees, more solutions, more international – that aptly sums up HANNOVER MESSE 2017,” commented Dr. Jochen Köckler, Member of the Managing Board at Deutsche Messe. “Over the past five days, Hannover has served as a global hub for all things related to Industrie 4.0. Every sector involved in the digitalization of industry was on hand to showcase its answers to the key question faced by industrial enterprises everywhere: How can I best get my company into shape for the digital future? HANNOVER MESSE has resoundingly underscored its value as a prime source of orientation for decision-makers from around the globe,” he added. The show’s chosen lead theme of “Integrated Industry – Creating Value” put a major spotlight on the benefits of Industrie 4.0 and the role of humans in tomorrow’s integrated factories. As this year’s featured Partner Country, Poland called added attention to the need for close cooperation throughout Europe, while impressing attending professionals with its credentials as an innovative partner to global industry. 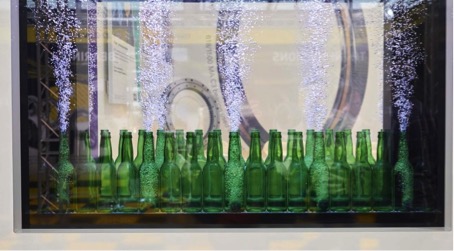 In his summation of the event, Thilo Brodtmann, Managing Director of the German Engineering Federation (VDMA), said: “HANNOVER MESSE 2017 has served as an unsurpassed showcase for the mechanical engineering sector. Industrie 4.0 is now well past the trial stage, and is already generating real benefits in application. The show clearly reflected the industry’s buoyant mood – a mood powered by having exactly what it takes to get the job done for the benefit of people everywhere. And when it comes to international competition, we are definitely among the frontrunners. In short, HANNOVER MESSE 2017 has been nothing short of outstanding.”

Dr. Klaus Mittelbach, CEO of the German Electrical and Electronic Manufacturers’ Association (ZVEI), remarked: “Industrie 4.0 is booming, and Hannover Messe has been promoting the topic from the very start. Moreover, the fair has made it amply clear that digitalization calls for a European identity. The pressing task at hand is to build the digital union at top speed.”

Of the show’s 225,000 attendees (up from 217,000 in 2015 as the most recent comparable event), more than 75,000 came from abroad. “This is an unprecedented figure in the 70-year history of HANNOVER MESSE,” commented Köckler, adding: “This impressively proves that decision-makers from around the world rely on HANNOVER MESSE as their definitive source of Industrie 4.0 orientation and solutions.” The largest number of foreign visitors came from China (9,000), followed by the Netherlands (6,200), India (5,300) and Poland, whose 5,000 visitors set a new Partner Country record. The long-term impact of Partner Country participation was underscored by an impressive 3,000 visitors from the U.S. as last year’s Partner Country.

“In close collaboration with our exhibitors, we succeeded in making this year’s lead theme tangible in the truest sense of the word,” remarked Köckler. “With an array of more than 500 application scenarios, the show gave real shape to the promise that digitalization holds for industry and the energy sector.”

Triumph of the cobots

A new generation of robots was also in the limelight: the so-called “cobots”, i.e. collaborative robots, which are about to fundamentally transform the way we work in factories. Their connectivity, artificial intelligence, innovative sensors and intuitive operation allow them to communicate directly with humans, as they learn autonomously and swap instructions with other cobots. As Köckler pointed out: “There was huge interest in the displays in the robotics halls. Not only are cobots an exciting prospect for large companies – many SMEs were also at HANNOVER MESSE to find out about these new helpers for their manufacturing 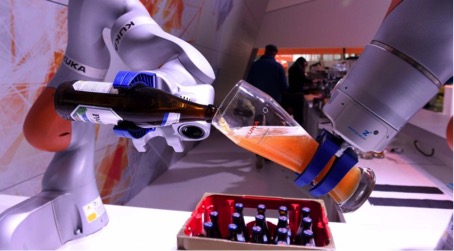 From sensors to platforms

Previously sensors were viewed as the main technology item connecting up different machines, but this year’s event put platform solutions to the fore. Concretely, this refers to cloud-based network connections for the entire production operations, including data collection and analysis. “The trend towards the ‘digital twin’ concept in the production environment is opening up entirely new vistas for industry,” reported Köckler. If testing can be carried out in virtual reality – for example, to see whether a new production line is going to work out – this makes it possible to bring products onto the market faster, at lower cost.

Energy systems of the future

Exhibitors in the energy halls showed how the energy systems of the future might well operate. According to Köckler, “our Integrated Energy Plaza created a central hub for the energy industry. The exhibits showed how the revolution in power generation can segue into a true energy transition, including the heat and mobility markets.” The main focus was on new energy storage technologies, which included serial production-ready electrolysis stacks, making hydrogen solutions a viable alternative even today. Some totally new approaches were also in evidence in the solar technology area, with several companies displaying ultra-thin, flexible solar foils that generate electricity even in low-light conditions, opening up new options for the practical application of the technology.

SMEs gearing up for digitalization

With almost every passing week, another consultant study is published with dire warnings that SMEs are not ready for digitalization. “HANNOVER MESSE 2017 has told a different story,” said Köckler, pointing to the numerous component supplier companies exhibiting at HANNOVER MESSE. “These companies are now digitalizing their processes and establishing connectivity with their partners, because they know that their customers – from the automotive industry, for example – expect the end-to-end digital tracking of each and every part every component.” Another example consisted of Salzgitter AG, which presented a coordinated display at HANNOVER MESSE underscoring how Industrie 4.0 and digitalization have changed the way they see their business, and the solutions that are already in place.

Growth in the startup segment

Following on the heels of last year’s successful launch, the “Young Tech Enterprises” segment of the fair enabled young businesses to introduce themselves to potential investors, customers and partners. More than 150 startups were on hand, exhibiting storage devices for renewable energy networks, operating systems for augmented reality and mini-wind power plants for cars and trains: “The startup area of the fair is going from strength to strength. We are confident that many of them will decide to take the plunge next year with their own stand at HANNOVER MESSE,” added Köckler.

Featured as this year’s Partner Country , Poland sent a total of 200 companies to Hannover, highlighting the country’s strong credentials as a dynamic and innovative industrial location. Research and startups are a special priority for the Partner Country. This was the message conveyed by Polish Prime Minister Beata Szydlo in her address at the HANNOVER MESSE Opening Ceremony, and these themes were also at the forefront of the exhibits during the event. Poland also succeeded in underscoring its leading position in eMobility. The high degree of interest in HANNOVER MESSE among Polish political circles was confirmed by the presence of such high-ranking delegates as Jarosław Adam Gowin, Polish Minister of Science and Higher Education, and Mateusz Morawiecki, Minister of Economic Development and Finance.

Beginning in 2018, the annual Industrial Automation (IA) show will merge with the biennial Motion, Drive & Automation (MDA) – both representing leading fairs staged under the HANNOVER MESSE umbrella. IA and MDA will then take place jointly under the new name of “Integrated Automation, Motion & Drives” (IAMD) – reflecting the entire spectrum of industrial automation, power transmission and fluid power at HANNOVER MESSE. 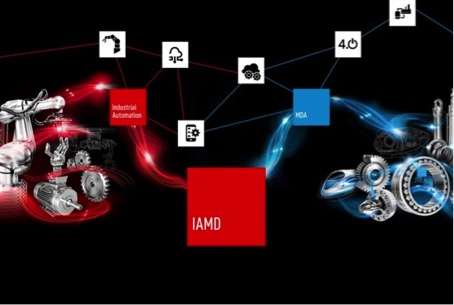 Beginning in 2018, CeMAT, the world’s leading intralogistics trade fair, will be staged every two years in parallel with HANNOVER MESSE. “Production and logistics processes are in the process of becoming intelligently integrated, enabling even more efficient, flexible production processes. At CeMAT we will be making this integration tangible and will demonstrate the resulting potential,” said Köckler. Additional display sectors at CeMAT include logistics solutions for retailing and logistics services. “Efficient logistics processes are of critical importance to the business success of online retailers or bricks-and-mortar retailers. At CeMAT they’ll find the right logistics systems for omni or cross-channel solutions,” reported Köckler.

CeMAT and HANNOVER MESSE will be a strong duo next year, providing a unique platform for international decision-makers from industry and logistics.

The next HANNOVER MESSE will run from 23 to 27 April 2018, with Mexico as its official Partner Country.

From Industrial Automation and MDA to IAMD – 2 are now 1

As from 2018 HANNOVER MESSE will be even stronger. The two leading trade fairs Industrial Automation and MDA will be amalgamated in order to create a new annual event: Integrated Automation, Motion & Drives (IAMD). IAMD will present the complete spectrum of industrial automation, IT, power transmission and fluid power technology. Thanks to its size and significance, IAMD will be the premier platform for investors and decision-makers.

Leading exhibitors and trade associations initiated, co-developed and promoted this fundamental step in response to technological and market-oriented developments. The new IAMD is a one-of-a-kind trade fair for industrial automation, IT, power transmission and fluid technology.

Along the entire value chain, industrial sectors and systems are becoming increasingly integrated. The trend towards connectivity and built-in intelligence has resulted in ever-shorter innovation cycles. At the same time there is a growing demand for total solutions geared to practical operating requirements. HANNOVER MESSE has made structural changes in response to these developments. The amalgamation of Industrial Automation and MDA will create a global hotspot for smart manufacturing solutions designed for the factory of the future.

You can find more information about the change here