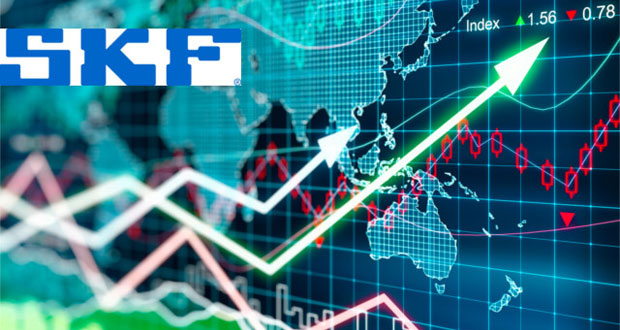 “Net sales in the second quarter was SEK 18.4 billion. Organic sales development was in-line with our expectations, 4% higher than the previous quarter and 4% lower year-over-year.

Although markets remain challenging, our cost reduction initiatives, including the profit improvement program within Automotive, are materializing according to plan. This contributed to an 11% operating margin excluding one-time items. Cash flow generation was a solid SEK 1.2 billion (excluding divestments and acquisitions), around SEK 500 million higher than last year. This continued resilient performance is a sign that we are on the right track in our effort to shape SKF into being leaner, more customer-focused and competitive.

The consolidation of three factories in North America was announced on 9 June, including an investment of SEK 150 million in manufacturing upgrades. This is the latest activity in our ongoing program of investments in making our manufacturing more flexible, competitive and better suited to serve our customers.

The divestments of our Kaydon velocity control and fly-by-wire businesses were completed on 30 June. As a result, we received SEK 3 125 million, which contributed positively to cash flow in the quarter. The effect on net profit was SEK -380 million, mainly related to taxes that we expect to pay in the coming quarters. In total, over SEK 4 billion has now been raised through the divestments of non-core businesses during the last 12 months.

As we look ahead, we see signs of the market stabilizing. Entering the third quarter of 2016, demand for SKF’s products and services is expected to be relatively unchanged compared to the same period last year. Sequentially, demand is expected to be weaker, in-line with normal seasonality.”

Outlook for the third quarter 2016

Demand compared to the third quarter 2015

Demand compared to the second quarter 2016

You will find all information regarding the SKF Half-year report 2016 on the Group’s IR website.

The information in this press release is information which AB SKF is required to disclose under the EU Market Abuse Regulation (EU) No 596/2014 and pursuant to the Securities Markets Act. The information was provided by the above contact persons for publication on 21 July 2016 at 8:00 CEST

SKF is a leading global supplier of bearings, seals, mechatronics, lubrication systems, and services which include technical support, maintenance and reliability services, engineering consulting and training. SKF is represented in more than 130 countries and has around 17,000 distributor locations worldwide. Annual sales in 2015 were SEK 75 997 million and the number of employees was 46 635.