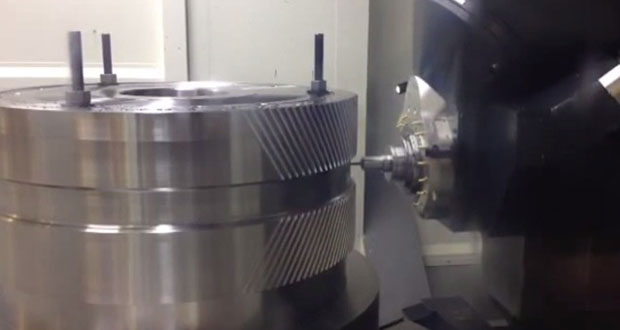 “This investment represents our commitment to meet the growing demands of our energy-market customers,” said Carl Rapp, vice president of Timken Power Systems. “The new facility will be able to supply customers in the power generation, oil and gas, refining and pumping industries with reliable, high-speed gearboxes to keep their pumps, compressors and generators running in some of the most challenging operating environments in the world. While low oil prices represent a near-term challenge to the industry, we expect sales for our new high-speed gear drives to continue to grow over the coming years.” To meet growing demand, Timken Power Systems equipped the facility with two 5-AXIS machines that employ gear milling technology instead of the traditional hobbing process. These machines can perform up to six different operations used to produce helical gears, shafts and pinions from raw material, with the potential to reduce the OE production cycle by weeks.

“The gear milling process, for example, can reduce pure machine time of a standard-sized gear from 110 hours to 25 hours,” said Boyd Swearingen, general manager of the new facility, as well as Timken Power Systems’ business in the Gulf Coast, Latin American and Middle East regions. The milled gear teeth are finish ground on a traditional Hofler form grinder to achieve the required AGMA 14 quality level of Philadelphia Gear drives. Before shipment, each gearbox then undergoes a full-speed no-load spin test that measures sound levels, temperatures and vibration.

Swearingen noted that in addition to the state-of-the-art equipment, the Houston facility is unique for a gear shop and incorporates ergonomic safeguards in the assembly area. “It’s a very clean plant, not what you typically think of as a gear shop,” Swearingen said. “In addition to the machinery being totally enclosed and EPA-compliant, all the electrical and plumbing are buried within the foundation to remove hazards and enhance the aesthetics of the facility.”

(To view a short video of the new milling process as well as facility images, visit the Image and Video galleries at www.timken.com/news.)

The Timken Company has been steadily expanding its ability to service the entire industrial powertrain beyond bearings by leveraging its recent acquisitions of leading brands that provide solutions in gear motor and generator services as well as electronic controls. The Timken Power Systems geographic footprint now provides services from more than 20 locations in seven countries.

About The Timken Company

The Timken Company (NYSE: TKR; www.timken.com) engineers, manufactures and markets bearings, transmissions, gearboxes, chain and related products, and offers a spectrum of powertrain rebuild and repair services. The leading authority on tapered roller bearings, Timken today applies its deep knowledge of metallurgy, tribology and mechanical power transmission across a variety of bearings and related systems to improve reliability and efficiency of machinery and equipment all around the world. The company’s growing product and services portfolio features many strong industrial brands including Timken®, Fafnir®, Philadelphia Gear®, Interlube®  and Drives®. Known for its quality products and collaborative technical sales model, Timken posted $3.1 billion in sales in 2014. With approximately 16,000 people operating from 28 countries, Timken makes the world more productive and keeps industry in motion.